From the horrible yet exciting depths of the Cold War came the Myasishchev M-50 / M-52 ‘Bounder,’ a Soviet supersonic bomber.  From ‘Bounder’ leapt the bogeyman M-60, a Soviet design for a nuclear-powered bomber.  From the M-60 radiated this model of the terrible and amazing Russian Nuclear Powered Bomber.

An enormous four-jet bomber first ripped the sky over the in 1957.  A long sleek fuselage on a delta wing, ‘Bounder’ publicly roared over in the 1961 Aviation Day flyby.  Though intended to be a supersonic strategic bomber the big beast would more accurately have been code-named “Blunder” as one aviation wag put it.  The big bomber was devoid of high-speed flight understanding.  Not long after ‘Bounder’ was flown in the presence of Westerners, the Myasishchev Bureau was disbanded.  ‘Bounder’s’ engines were used on the Tupolev Tu-22 ‘Blinder,’ which shares similar fuselage lines with ‘Bounder.’

Years before the air show, the West was certain the bounding behemoth was powered by a nuclear reactor.

The December 1, 1958, issue of Aviation Week magazine ran an article titled “Soviets Flight Testing Nuclear Bomber,” which included a simple 3-view drawing of the supposed nuclear powered supersonic craft.  The drawings came from a DoD briefing.  The article claimed that the aircraft was indeed flying, and had been seen by multiple observers.  A few months later,  kitted it. 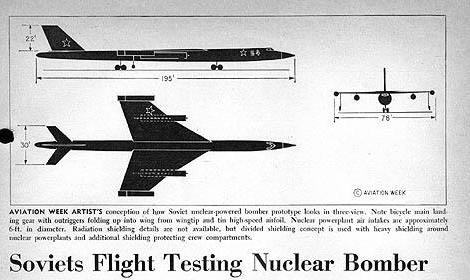 The drawing that Aviation Week included was clearly a crude, close-but-not-quite-right representation of the Myasishchev M-50, NATO code-named “Bounder.”  But the Bounder was not nuclear powered.  While Myasishchev did design nuclear powered versions of the Bounder, they never built one, much less flew one.  The incident, while little known to the general public today (go ahead… ask a hundred of your closest friends, family and co-workers if they’ve ever heard of the article), is infamous in aviation journalism.*

Further history of the ‘Bounder’ can be read at the end of this review, both by and from the Russian language website “Testpilot.”

’s policy was to be first with significant, new aircraft designs.  Additionally, intentionally made simple kits so that anyone could build them.  That also kept down costs, since cutting molds was very costly.  That is why ’s balance sheet was envied by Revell and Monogram.  After the December 1, 1958 article in Aviation Week, wasted little time.  In 1959 they hit the shelves with kit number 128-98, the Russian Nuclear Powered Bomber.  Jo Kotula created the incredible box artwork.  The photo at the beginning of this article is of the USA issue kit.

But this time the formula did not work.  For whatever reason, sales were poor.  Once the initial production run sold out, never ran the molds again in the .  was good at re-working molds to extend their life, as evidenced by the Impetus Nuclear Airliner being reborn as the Ragnarok Orbital Interceptor.  But little else could be done with the Nuclear Bomber.  So the molds were evidently shipped to Aurora Great Britain for the Playcraft Issue and it appeared in the 1962 catalog.  There are no significant differences beyond the usual box and instruction logo and text changes.  There may be other issues of this kit, such as Aurora Canada or , but they have not surfaced to date.

released it in a conventional lid-tray box with dramatic brooding artwork of the bomber blazing away over .  Inside are instructions, decals, 40 gray styrene parts and three clear pieces: canopy and two-piece stand.

Molding of the parts is excellent with no flash, mold seam lines or sinks, but there are a couple of visible ejector marks.  Recessed lines show the control surfaces and gear doors.  Raised areas show where the decals go.  The landing gear bays are not open.

This is a relatively simple model.  With virtually no exterior detail it is smooth and clean.  The tandem landing gear parts are probably the most intricately detailed pieces for the aircraft; the most molded-in detail is found on the stand!

We now know the M-50 is 193 feet long and 115 feet wide.   underestimated the wings by about 30%.  You may ask, what scale is it closest to?  Amazingly it is exactly Box Scale!  And box scale is no scale at all, unless by accident.  “Box scale” was whatever size resulted from the model company scaling the kit to fit into their zillion boxes bought at bulk price, back in the days when the nascent plastic modeling hobby was less discerning about matching subjects accurately to scale.  And these boxes were (are) easy to stack!

A single quad-folded sheet guides the modeler through 20 assembly steps.  The model is shown in an exploded view.  The other side is all advertising for ‘s missile series: IM-99 Bomarc Missile with and without Launcher; Martin Mace TM-76 Guided Missile, Nike Hercules with launcher, Regulus II with and without Launcher and a list of all available models.

Painting instructions suggest three colors: black, red and silver.  By then already marketed their own SPEED-DRY brand of enamels and their own polystyrene cement.

Decals include a simple sheet of eight Soviet stars and the aircraft number, plus a decal for the stand: “U.S.S.R. NUCLEAR BOMBER”

‘s Russian Nuclear Powered Bomber was a chillingly fun model back in the day.  It is one of those subjects based on speculation with a grain of truth.  The was designing a nuclear powered bomber and the Russians tried it too.  M-50 was flying and the lines reflect the prototype.  Since it was a speculative design, did not try to detail it up much.  It is still an intriguing model.  Collectors should enjoy it as should anyone who wants a simple model ‘Bounder.’  Molding is first-rate and fit is excellent, too.  Drawbacks are box scale size, basic exterior detail, simplified detail and raised insignia.  Today I know of a couple of M-50 models available, one in 1/144.

This is a neat model – if I owned it I would build and display it!

This superb built-up is courtesy of MerlinJones at this link

*Highs* – Molding is first-rate and fit is excellent too

*Verdict* – Collectors should enjoy it as should anyone who wants a simple model ‘Bounder.’

Another milestone in mankind’s step forward in the development of atomic-powered engines is the Soviet Nuclear-powered bomber with engines capable of keeping a continuous patrol for untold hours without re-fueling.  Using a nuclear reactor in place of the usual chemical fuel combustion chamber with a shaft connecting the compressor with the turbine by passing through the reactor itself, this engine promises some 70,000 pound thrust.  Equipped with two of these engines, the Soviet bomber can perform in supersonic and subsonic speeds for lengths of time limited only by the endurance of the crew and the engines.  The refueling will no longer be a major problem for one pound of atomic fuel can furnish energy exceeding the amount of power created by one and one-half million pounds of gasoline.

Each of the two atomic powerplants is located at about the middle of a wing and is housed in nacelles measuring some 36 feet long with air intakes about 6 feet in diameter.  Supplementing these two atomic turbo jets are two conventionally fueled turbojet engines located in the wing tips capable of producing about 35,000 pound thrust each.  These chemically fueled wingtip engines can be used for emergency use when an extra burst of speed is necessary in addition to supplementary power for takeoff.  On returning from a mission, they may also be used for landing when the atomic reactors have been turned off.

This bomber has a fuselage length of some 195 feet with a wingspan of about 78 feet.  The delta-type wing has a definite sweepback on the leading and trailing edges with a fairly thin airfoil.  The sail type vertical fin extends upward roughly 22 feet above the fuselage and the horizontal tail surfaces spanning about 30 feet, sweep back to conform with the wing angle.  Although the gross weight is approximately 300,000 pounds, this giant atomic bomber is rated in the Mach 2 category and would be an ideal craft for maintaining a continuous airborne alert.  Equipped with a substantial weapon pay load, with the ability for a quick firing of 1,000 mile or more missile devastation and followup with a high speed low-flying penetration under radar defenses to key targets, the value of these atomic bombers is beyond military valuation.

The crew quarters are located in the nose as far away from the reactor engines as possible for protection from radiation.  The two conventional turbo jets located in the wingtips are interchangeable with atomic engines if the necessity arises.  Equipped with a bicycle main landing gear with outriggers which fold into the wings, the Soviet bomber is trim and sleek.  The skies vibrate when this aircraft glides overhead on its patrol.

In addition to atomic powerplants for marine use such as atomic submarines and other ships of the sea, mankind is following through with another truly remarkable feat with their nuclear propulsion program.

Perhaps the near future will unfold unlimited power for non-refueled voyages and flights over the face of the earth.  Perhaps, also, this same source of tremendous energy will carry the unpredictable human representative on his exploration of the vast unknown stretches of space beyond the horizons of his own solar system.  Only time will tell.

Myasishchev M-50 (Translated from Russian on the Internet)

The first projects Myashishev supersonic aircraft belonged to the so-called “family of 30.” Projects M-30 and M-31 medium bombers, were more likely to take-off mass of less than 100 tons of M-32 and M-34 heavy bombers were, but did not have intercontinental range.

July 30, 1954 DB-23 , in accordance with the decision of the Council of Ministers, began the development of “releasably bomber” 50 “, which consists of an attack aircraft carrier and four turbojet V.A.Dobrynina or AA Mikulin.  According to the task was to reach a maximum speed of 1,800 km/h at cruising 1500-1600 km/h at altitudes of 14-15 km.  Service range from 5,000 kg bomb load was estimated at 13,000 km.   issued a preliminary design, but the July 19, 1955 aired another government decree, which changed the direction of work on “50.”  Now the required “clean” long-range bomber with high cruising speed, calculated under the 4th turbofan engine NK-6 or TRD WD-9A.  Resolution of the March 1956 provided for the installation of the new TRD M16-17.

As the plane was to make a long flight at supersonic speeds required engines with a thrust without afterburner at least 17,000 kgs.  The most suitable engine was developed in OKB P.B.Zubtsa.  Its engines “M16-17” (RD16-17).

Bomb armament maximum weight up to 30 tons was placed in a large gruzootseke, which was supposed to hang and also managed a supersonic cruise missile, the M-61 with folding planes having a launch range of up to 1000 km and also create a bureau Myasishcheva.  Studied and the possibility of equipping aircraft heavy cruise missile RCC P.V.Tsybina.  In the first experimental aircraft defensive weapon was out on production aircraft intended use of cannon fodder installation with remote control.  At the suggestion of Khrushchev considered as an unmanned version of the M-50 – M-51, in which the fuselage was mounted ultra-nuclear weapon power (was not implemented). ** [sic]

* The Unwanted Blog. “Av Week” and the Soviet Atomic Bomber.