In 1959 released two more 1/48 World War I ‘Famous Fighter’ aircraft kits.  The first was number 135-69, the Fokker D-VIII ‘Flying Razor.’   The second kit, and the subject of this review, was the Halberstadt CLII,  #136-98.  As with all kits of this period, the logo is oval with the sunburst in the center background and the words ‘Famous Fighters’ written in the oval border.  Jo Kotula, who took over for Jim Cox in about 1957, did the box artwork.  The parts were molded in black and gray plastic.

The kit proved successful, as were the vast majority of the WWI series.  When was associated with Parent’s Magazine, the box top had their seal of approval.  The model inside remained identical.  The artwork remains dated 1959, but this issue may have extended into 1960.

The third issue still had the same part number but had the new logo.  This issue is likely from 1960/61 up to 1963 or ’64.  The ‘Famous Fighters’ was removed from the border but the sunburst remains.  There were no changes inside except for the updated logo on the instructions.  It is not unusual to find this kit with old logo instructions.  never wasted much and would use up the old instructions before putting the new ones into circulation.

The fourth issue, #136-130 looked identical inside and out except for the new price extension on the kit number.  Retailers had been pressuring kit manufacturers to eliminate the price extension or raise prices; Aurora (USA) decided to first increase prices then eventually eliminated the extensions completely.  This issue probably dates from 1963/64.

In 1972 reissued this kit again under subsidiary K&B in the “Collector’s Series.”  The original painting is by the renowned artist John Amendola, who did most of ’s art in the late 1960s and 1970s.  For this kit, the molds remained the same except the ground base was dropped, the two ground figures were retained, a vacuform “Battle Terrain Display Base” was added, as were new decals for the aircraft on the box top.  The parts are molded in bright red and black, with the terrain base in tan; please note that other base colors have bases have been reported.  The sides of the box states that there are “detailed painting and rigging instructions” but they simply reference the box top artwork and John Amendola’s historical notes on the instructions. 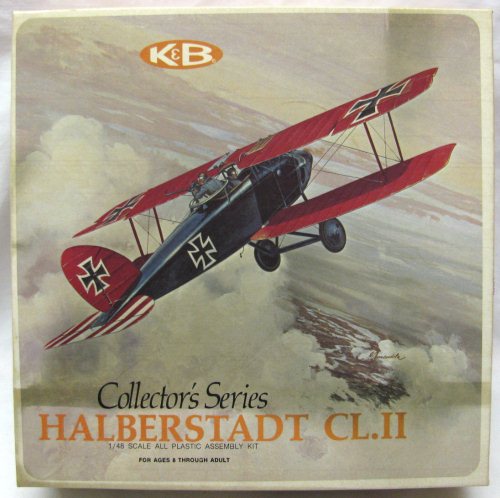 In 1972 this kit was also released in under the label only.  The kit number is 1136-260.  The only difference internally is the Aurora Products Canada Ltd. instructions in both English and French. 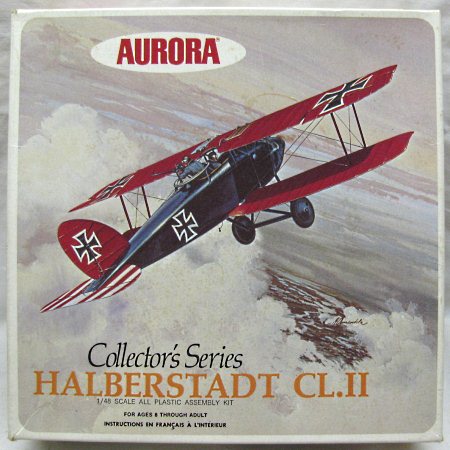 This kit was marketed in other countries as well.  One such issue is from the .  The true release date is not known, but may be from the mid to late 1960s.  The kit number is 136.  The kit was marketed through and has instructions in German, Dutch, French, Italian and Swedish.  Oddly, it has the old style logo from the 1950s.

researchers state that when bailed out of the model business and sold the molds to Monogram in 1977, the Halberstadt was one of the kits damaged beyond salvage in the infamous train wreck.

The only other injection molded 1/48 Halberstadt CL.II kits I know of are the acclaimed Blue Max kit – now Freightdog Models – and one by Mirage.  Tom’s Modelworks offered a high quality vacuform and metal kit at one time.  Regardless, a quick spin around the net shows that this model can be built into a beauty!

This review is of an original 1960 model in a ‘long box’ dramatically decorated by the great artist Jo Kotula.

Inside are instructions, decals, and 42 parts injection molded in black and gray plastic.  One piece is an identification button imprinted “HALBERSTADT CL-II .”  Molding is good with some flash, mold seam lines, a few sink holes, and some visible ejector marks typical of this era.  There are many on the top of the bottom wings and wing struts. The worst sinks I found are on the bottom of the nose where the male/female fuselage attachments are molded.  Struts and piping and trailing edges are too thick.  The pilot is seated; the observer is leaning from his station reaching for something.  That ‘something’ is the flight assignment in the hand of a reaching orderly.  Figure detail is soft, as though one passed them over a flame to round off the edges. The pilot has a nasty sink hole while the others have ejector circles.   included a base with molded chocks to pose the model and figures upon.

Test fitting reveals fair fit.  Filler will be necessary along the fuselage and empennage. Care will also be required where the cabanes and interstruts mate into the airframe.

As was the fashion of the era, all insignia and data are molded onto the airframe.  Removing it is a horrible exercise at best even on flat surfaces!  Happily, by this time, mold makers showed more finesse and the raised detail is not a chunky as the earlier kits.

was one of– if not the first- American manufacture to make models to a standard size.  This quarter-scale model scales closely.  With a top wing span of 36 feet 5 inches, their CL.II is too wide by 17 inches.  I measured the fuselage from spinner to elevator trailing edge at 23 feet 9 inches, which is almost perfect.

The 7.92mm Spandau LMG 08/15 and Parabellum MG14 machine guns would be unrecognizable if you did not know what they were supposed to be.  A scarf ring is provided for the Parabellum.

The cockpit is minimal and the pilot blocks seeing most of it.  Only the floor, seat, and a slightly detailed instrument panel are included.

Molded data on the fuselage includes weight and dimensional data as well as the aircraft type and serial data: Halb. CL.II 6438/18.   also molded a display base with textured ground and wheel chocks.

did a good job with the instructions.  The large sheet is segmented into seven assembly sequences for the 42 parts.  It has a photo of the finished kit on the back.  advertised their own brand of paints, glues, available kits, and other promotions on the sheet.  All parts are identified.  Paint guidance for eight colors is shown on the photo of the finished model.

Another great trip to memory-drome!  Even today this kit is sought for building and collecting.  Some collectors enjoy building the kit as they did in the 1960s – straight from the box.  Those who wish to build it to current standards will find it ripe for detailing and in need of serious surface sanding if you want to remove the insignia guide lines.  One can buy several accurate modern kits for the price of one of these.  No doubt you can make a respectable model with it, as evidenced by the many examples online.  However, I would only buy and build one for nostalgia.

History of the Halberstadt CL II

(From the instructions, using punctuation and spelling)

In the late autumn of 1917, the Halberstadt CL II made an appearance on the Western Front. This two-seat fighter reconnaissance plane was powered by a 180 H. P. Mercedes motor. The main spars and ribs of the wings were spruce, internally and externally wire braced with a plywood leading edge. The fuselage was a wooden structure with center section struts of steel tubing. Both the fuselage and wings were fabric covered. A wooden frame-work made up the tail unit, fabric and plywood covered. The undercarriage consisted of rigid wooden ‘vees’ with rubber cord shock absorbers.

The armament included an external rack on the side of the fuselage for hand grenades when ground strafing. The observer had a single movable Parabellum machine-gun on a ring-mounting and the pilot used a synchronized machine-gun mounted in the fairing above the fuselage. The Halberstadt CL II saw service with squadrons in the 2nd, 4th, 17th, and 18th armies.

The British Infantry near Perrone in September of 1917 had physical contact against these two-seat fighters when the planes attacked with contact bombs and hand grenades. A specialty of the Halberstadt CL II was ‘contour fighting’ or close ground attack following the con-tour of the trenches of the enemy.

Although not exceptional in high altitude performance, the Halberstadt had extremely good manoeuvrability when under 1,000 feet. This gave the ability to dodge ground fire, and with the thin steel plate fitted along the bottom of the fuselage for protection against ack-ack fire, the Halberstadt was formidable in ground-strafing.

This German fighter closely resembled a single-seat scout. The pilot and observer shared a communal cockpit giving instant recognition in observation and gunnery. The pilot had a wide range of visibility whereas the observer was furnished with a clear firing field. An unusual feature in a two seat plane was the one-piece elevator of the Halberstadt which give excellent longitudinal balance. Approaching from the air, the Halberstadt could move quickly and surely, creating havoc in the enemy lines.