By Michael Boss and Mary Ridgway

Editors Note: Michael Boss is an illustrator who was good friends with Jack Leynnwood from 1971 till Jack’s passing in 1999. This article was written by Michael and Mary in 1995. Thank you both for a superb inside look at one of the great illustrators -Alan Bussie

When you were a kid, do you remember going to the hobby shop to spend your hard-earned lawn mowing money on that plastic airplane model kit that you had your eyes on for weeks? Or perhaps you spent your time hinting to family members that if they wanted to get you a present, this particular model was just the thing? Maybe you tried to bribe (or blackmail) siblings into making a contribution toward the ultimate cool kit? Most of us had that kind of obsession for plastic model kits at some point in our youth. There was one exceptionally gifted artist whose job it was to fan the flames of our insatiable desire. His name was Jack Leynnwood, and he was responsible for many of the high-energy illustrations that made us lust for kit after kit. During his long career, he painted hundreds of model kits box wraps from the 1950s through the 1980s. 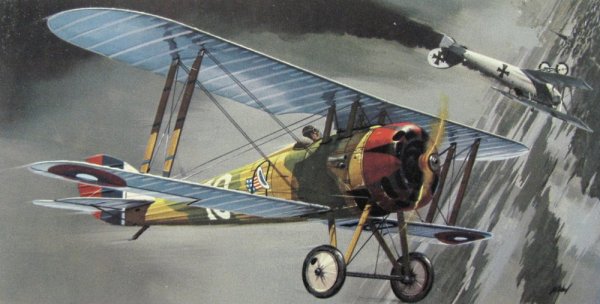 Revell Nieuport 28 C-1. This illustration was for a middle 1960s release of the 1/72 scale kit in the markings of Lt. Douglas Campbell of the Eddie Rickenbacker’s “Hat in the Ring” squadron of WWI. The original was rendered in gouache.

Jack’s artwork is an understated part of American culture. Most people END_OF_DOCUMENT_TOKEN_TO_BE_REPLACED