Many customers have written emails asking how to build vacuform kits. My skills in this area are lacking – which is a nice way of saying that I have ruined most of the vac kits that I have started. But I noticed several customers – like David Miller – who purchased vacuforms repeatedly. I asked, and he sent me photos of his completed models. They are incredible! He was kind enough to write this article. I hope you find it as educational and enjoyable as I do. Alan Bussie

“Significant modeling skill is required to build vacuform kit. Not recommended for beginners.”

This statement is contained in the description of many vacuform models offered through Old Model Kits (www.Oldmodelkits.com). It is intended to inform potential buyers that a vacuform kit is substantially different from the injection-molded kits offered by major brands such as Airfix, Revell, Tamiya, Hasegawa and Monogram. Generally, major brand injection molded kits have detailed instructions, painting guides, good to excellent part fit, and require minimal preparation prior to painting. Vacuform kits may also share some of these characteristics, but generally do pose their own unique challenges. Having said this, however, building a vacuform kit gives one an opportunity to develop some new modeling skills. If you’ve built several injection-molded kits, then you may already have experience with filling seams, re-scribing panel lines and adding aftermarket or scratch-built details to models. These same skills are needed when building a vacuform model. Most importantly, with some care, a beautiful and unique model can be built from a vacuform kit.

Editors Note: every once in a while you run across someone with exceptional knowledge in a certain field. During an email exchange about older kits, I asked Dave if he would mind writing an article about early kits in the US. Dave’s knowledge has been an education to me, and I hope that you enjoy it as well. Alan Bussie

Who made the first plastic model kit in the USA? One of these three companies- Varney, Hawk or Empire- was the first. A later company, O-lin, was significant in early production. We will probably never have an accurate view of the pioneer or the earliest history of the plastic model industry in the U.S. because there was no one innovation that could be described as a starting point. Ideas merged and evolved and eventually came to appear as progress.

The plastic model was not a new idea. In 1934 Dick and Phil Mates, founders of the Hawk Model Company, displayed and sold finished (not kits) plastic models at the re-run of the 1933 Chicago Worlds Fair. In the mid to late 1930s and into World War II, FROG in England had made 1/72 plastic kits cast in acetate plastic and usually including some metal parts. At that time in the U.S., plastic casting was expediting the production of many items necessary to fighting the war, including constant-scale aircraft identification models. These models were originally made of wood, each hand-crafted in high school and trade school workshops across the country. These ID models were distributed in great numbers to training and operational bases world-wide. Casting the models in plastic produced larger quantities in less time and with greater uniformity in appearance. Several companies that marketed balsa models before the war were asked to produce ID models in plastic, Hawk Models among them. The Mates brothers quickly adapted casting technology beyond their war production, creating generic propellers for their famous line of solid wood models.

Gordon Varney produced wood and metal model railroad equipment before the war and may have been another business drafted into wartime production. In 1944 Varney produced a wood, cardstock and metal PT boat kit that featured detail parts cast in tenite, an injection molded acetate most often used for tool handles and control knobs of all sorts. At the end of the war, Varney introduced an LST model in the same mixed materials. 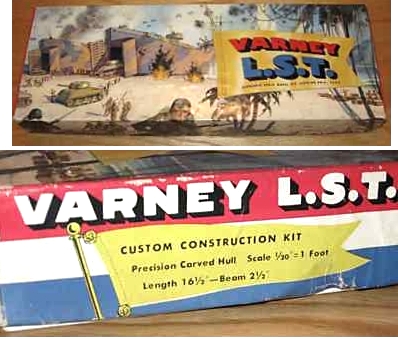