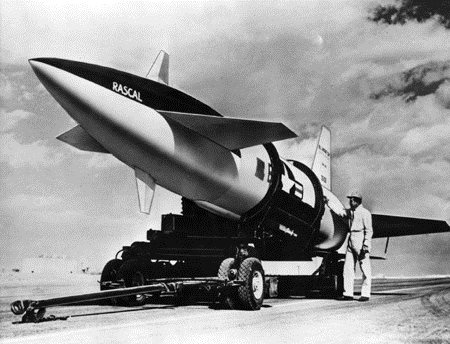 Inside the box are five sprues packed loose, not sealed in a clear plastic baggie.  Also included are decals, an instruction sheet and an accordion catalogue. (See the photos at the bottom of this review.)

The sprues are molded in black, red, white and yellow.  I can not tell if the red missile half was attached to the red sprue or included separately.  Molding is of good quality although suffers from what was acceptable in the era.  I can not find a hint of flash, and the mold seam lines and sink holes are minimal, but back then people didn’t seem to be bothered by visible ejector circles.  The molding is very crisp, except for the gaps between the airframe and control surfaces.  All surface detail is raised, including rivets, some of which seem to be over-scale.

Regardless, good clean edges make this a good clean model.  In a dry test fit the parts fit together very well, as you would expect from Monogram.

Modelers of Monogram’s 1970’s-era 1/48 B-24J may notice the caterpillar tractor.  The tractor in this kit is the exact same model.  Monogram held onto the tools and dies from the Rascal and copied them for the B-24J.  You will notice photographs with the yellow parts of this kit next to a black sprue from the B-24. It is the exact same tractor.  There have been rumors that the crew were identical; they are not.

Rascal tractor vs. later B-24J tractor (click any to enlarge)

Seven red and white parts create the GAM-63. The rear dorsal and bottom fins snap into place to allow you to fold them.

This caterpillar mule is made up with 13 parts. Although it has a windshield frame, it has no clear plastic to simulate glass.

This neat little kit is built with 40 parts (41 if you count the technician)!

Detail is sharp and convincing.  If it is not completely to-scale, then it is close.  Surface detail of the missile is sparse and mainly simulated with raised panel lines and rivets.

The tractor is toy-like.  Monogram did not even mold air between the running gear and the frames.  It does not look very good and I did not even build it with my B-24.  Perhaps today there are aftermarket sets to improve it.  Otherwise it will rely of the skill and patience of a model builder to cut those areas open.

The chassis and carriage are quite impressive!  The only drawbacks I see are the big cog for raising the cradle and the thick safety railing.  Monogram engineered “action features” into this (and many other models) so the loading carriage cradle can be raised and lowered.

The crewmen are not up to the quality of later Monogram figures yet they are far superior to what Aurora offered at the time.

Monogram made the best instruction sheets of the time.  One side featured a photograph of the assembled kit, an exploded grayscale illustration of the model(s) with each piece numbered and named and a “finishing” section, i.e., painting and decaling.  A brief history was included, too.  The other side featured an illustrated 21-step process of assembling the four subjects of this kit.  Monogram supported the textual instructions with halftone photographs of the models during assembly.  Superb!

Decals are less impressive. They were thicker and had more excess carrier film than what is accepted today.  While stenciling is sharply printed, the national insignia is sloppy and out of register.  Only one missile choice was printed, USAF 1014.

Monogram did not produce their own brand of paint back then, but they did market their own tube cement.  Painting guidance is general.

If Monogram was not the best model maker of the era, then they were tied for first place.  Their classic Phantom Mustang is still considered to be one of the best P-51D models available.  This smart set of the Bell GAM-63 Rascal shows why Monogram was so highly though of.  Molding quality for the era is high.  Detail is sharp and convincing, and if not completely to-scale then it is close.  The “action features” carriage cradle will come in handy when you load your Rascal on your 1/48 B-47!

Their authenticity did not carry into the high-speed tracked tractor.  It suffers for toy-like components.  Monogram’s Regulus II and Snark missiles, with earlier kit numbers, both have this tractor; presumably the model was engineered before Monogram progressed towards more sophisticated models.  Thus thus company marketing rascals just kept amortizing the tooling by passing it along, as they did with the 1/48 B-24J.

While I have never personally seen this kit assembled, the instruction sheet images show what can be considered as an impressive set!  If I can ever snare a Rascal you can bet I will build it!  This 1/48 Strategic Air Command air-to-surface supersonic guided missile and ground equipment should make an amazing display!

Restored Rascal and live B-47 launch (click any to enlarge)

The Rascal, originally designated as the XB-63, was an air-to-surface supersonic guided missile armed with a nuclear warhead.  Its development was inaugurated in April 1946.  The Rascal was intended as a “stand off” weapon, to be launched from Strategic Air Command bombers as far away as 100 miles, thus reducing the manned bomber crew’s exposure to enemy defenses in the immediate target area.  Launched from its carrier aircraft, the missile would continue toward its predetermined target controlled by a self-contained inertial guidance system.  The terminal dive began about 20 miles from the target.  During this final phase of flight, the Rascal’s course could be altered by signals from the launching “director” aircraft.

The first launch of a guided Rascal took place in October 1953 from a Boeing DB-47 director aircraft; various successful powered flights were demonstrated during later tests.  The GAM-63 program was terminated in late 1958, shortly before the first Rascal-equipped SAC unit was to become operational, in favor of the more promising and longer range Hound Dog missile.

The Rascal on display was delivered to the museum in November 1958 from Bell Aircraft Corp., Buffalo, N.Y.