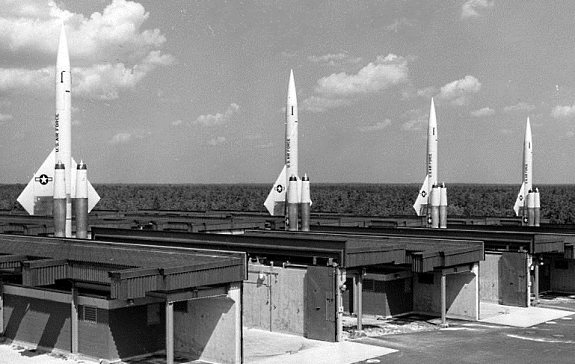 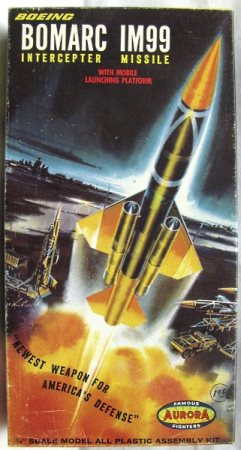 131-98 was issued in 1958 and features the Bomarc Missile only, along with the traditional Aurora ‘Triangle Base’ clear stand, decals and instructions.

The very short production life of these kits greatly contributes to their rarity.  While Revell, Monogram and Aurora all witnessed very high initial missile sales, this was a bubble only.  The sales quickly collapsed.  When the 1961 catalog came out, the missiles were gone – lasting no more than 3 years at the very most.

Although restrained by packing tissue paper, the sprues were loose in the box which means that several pieces could be expected to be rolling around loose.  Later Aurora kits were internally bagged.  Instructions and decals were included, and occasionally a promotional insert.

This kit is essentially two models in a box, the missile and the launcher, with more than 60 injection molded pieces to build up this subject, in white and silver plastic.

Molding is fair in that most parts are well defined with no flash, a few slight mold seams and shallow sink holes.  However, visible ejector marks mar parts, such as along the leaf springs of the launcher.  I test-fitted the fuselage together and found most of the seams joined tight.  Liquid cement should fill them with little need for filler.

Bomarc appears close to 1/48 as advertised by Aurora.

Raised and recessed panel lines detail the surface although there doesn’t appear to be much in the way to represent.  After the fashion of the era Aurora molded markings and insignia with raised textured areas on the model.  On this model those eyesores might be difficult to remove from the rocket.  It will probably take time and effort to remove them.

It has respectable surface detail for the frame, wheels and springs.  However, Bomarc was not fired from a mobile launcher, rather from a hardened shelter nicknamed “coffin.”  Thus, this fanciful “mobile launcher” is actually the Bomarc transportation trailer – which did elevate and lower, possibly to assist in loading the missiles into the “coffins.”

Aurora printed up a large multifold paper sheet with text, line art and half-tone illustrations.  One side is the assembly instructions and the other side advertises all of their models, with focus on their series “Whirlybirds,”, “Giant Bombers,” “Modern Day Fighters” and “Famous Tanks.”  Aurora always used left-over white space to market their own brand of paint and glue too.

Assembly is guided via the “exploded” style of illustration.  Several illustrations coach building the F-99, the launcher, and joining of the two.  Thirty-one written steps support the graphics.  A concise history of the vehicle is included in a sidebar.  Minimal painting guidance is provided.

Only a single missile is offered on the decal sheet.  Decals have thicker carrier film that extends farther from the printed graphics than is acceptable today.  Yet they are sharply printed and registered.  All of those markings were intended to be applied over the textured areas.  Before using any of these older decals, please take appropriate precautions.  There is an article located here about saving or recreating old decals.

The two Bomarc decal sheets (click any to enlarge)

Aurora’s Bomarc is acceptably molded.  Thick parts and some ejector marking on the launcher suspension detract from the model, as do those thoughtful yet unappreciated raised insignia areas. 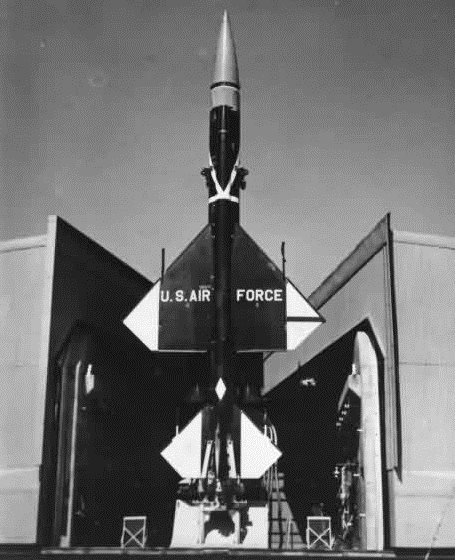 * The supersonic Bomarc missiles (IM-99A and IM-99B) were the world’s first long-range anti-aircraft missiles, and the first missiles that Boeing mass produced. The program also represented the first time Boeing designed and built launch facilities. It used analog computers, some of which were built by Boeing and had been developed for GAPA experiments during World War II. Authorized by the Air Force in 1949, the F-99 Bomarc prototype was the result of coordinated research between Boeing (Bo) and the University of Michigan Aeronautical Research Center (marc). The missiles were housed on a constant combat-ready basis in individual launch shelters in remote areas. The alert signal could fire the missiles around the country in 30 seconds. The Model A had a range of 200 miles, and the B, which followed, could fly 400 miles. The production IM-99A first flew on Feb. 24, 1955. Boeing built 700 Bomarc missiles between 1957 and 1964, as well as 420 launch systems. Bomarc was retired from active service during the early 1970s. Specifications First flight: Feb. 24, 1955 Military designation: IM-99A/IM-99B Classification: Missile Wingspan: 18 feet 2 inches Diameter: 35 inches Length: 45 feet Approx. takeoff weight: 16,000 pounds Top speed: More than Mach 2.5 Range: More than 400 miles (IM-99B) Ceiling: More than 80,000 feet Power: 50,000-pound-thrust solid-fuel rocket (takeoff); two 12,000-pound-thrust Marquardt ramjet engines (cruise) Armament: Nuclear warhead**