Many thanks to numerous KCCers and John Burns for their detective work. Without you this would have been impossible.

The name Monogram is synonymous with quality in model kits.   The founders, Jack Besser and Bob Reder, had a clear vision of what constitutes an excellent model kit and how to transform that into mass production.  Not surprisingly, Monogram was a well-run company and proved to be profitable for many years. In 1945 the company began producing stick/tissue aircraft kits and solid wooden kits of ships and cars.  Monogram’s very first aircraft was kit number C-1, the Whirlwind – a gas powered control line kit.   The first car kit was the R-1 Hot Shot Jet-Powered Racer.

The ship line consisted of a US Battleship, Destroyer, Cruiser, Aircraft Carrier and Landing Craft (#B1).

Although the wooden ship line was not expanded, the Jet Races line eventually included the Hot Shot (from above), R-3 Mono-Jet, R-4 Midjet, R-2 Terr-Jet and B-6Aqua Jet (for operation in water)

The non-flying B-17, B-24, B-25 and A-26 were among the finest scale models in their class and came with sandpaper, glue and paints.  These are highly prized among collectors today.  The popularity of the Speedee-Bilt line is such that it survived till 1957 – well after plastic models dominated the market. 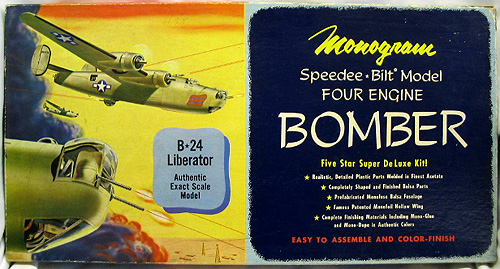 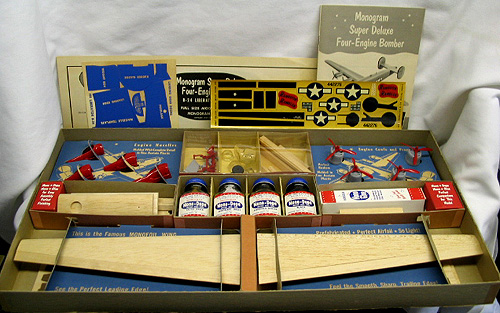 Speedee-Bilt and/or Superkits models were also issued in gift sets and are considered very rare.  Below is the Little Air Force Assortment, which contains two of both style kits.  Other assortments were also issued.

All kit numbers initially had the prefix “P” (for plastic) although this was changed to “PA” (airplane), “PC” (car), “PB”(boats) and “PD” (missiles) very shortly.  Although the molds and box art remained the same, some “P” and “PA” kits have small differences.   The PBY, for example, has rubber wheels in the “P” kit and regular plastic wheels in the “PA” kit.  Price extensions were used from the beginning. The logo used at this time was the “Four Star”, so called because of the four stars above the word Monogram, as shown on this F-105 Thunderchief.

Initial Monogram plastic kits had excellent detail for the time.  Beyond spinning props and wheels, however, there were not a great number of moving features.  Aurora and Revell kits followed the same pattern.  But in the very late 1950s there was a shift to ‘Action Models’ or kits with numerous moving features.  Where the trend started is not certain, but soon it was in full swing.  Leading this trend was the Monogram PA54-149 SBD Dauntless Dive Bomber from 1959.   It featured five interlocked, operating dive brakes worked from one center tab, trigger released center-line bomb, operating landing gear, elevating and rotating rear machine gun and operating tail hook.  As if that was not enough to light your imagination, there were also figures of the armorer, LSO (landing signal officer), the LSO’s windscreen and a bomb cart with an extra bomb.

Most new aircraft kits contained some form of action, ranging from gear that retracted and extended when you rotated the propeller (F3F and Gulfhawk), Jet Sound in the B-52 and much more.  But perhaps the most famous airplane action kit of all time is the magnificent Phantom Mustang P-51.  The Mustang main parts were molded in clear plastic, while the interior parts were molded in silver, black, red and zinc chromate green so that very little if any painting was needed.  The finished aircraft set atop a red plastic base which house two electric motors, buttons, levers and batteries.  One button ran the propellor, another caused the landing gear to go up and down (including the tail wheel and tail wheel gear doors), and the two levers dropped bombs from the wings.  The canopy opened up to show the highly detailed cockpit.

Sturdy cardboard “hard boxes” were used with lithographed slicks from the onset because of the experience gained with Speedee-Bilt kits.  Most new Plastikits were shrink wrapped with cellophane at the factory.  This is unusual as Revell and Aurora were still relying on small sections of tape on the two long sides to hold the box top on the bottom tray.   Today, perfectly intact early cellophane seals are rare because they become brittle with age and split.  Kits that did not split often have concave box tops from the inward pressure as the seal shrinks. Early Gift Sets were issued in the mid 1950s and are very rare.  Some are in special boxes such as Military Wheels, Auto Racing Trio, Air Force Patrol and TWA Airliner Set while others are specially designed sleeves that held existing boxes, like the Jet Air Force Gift Set. 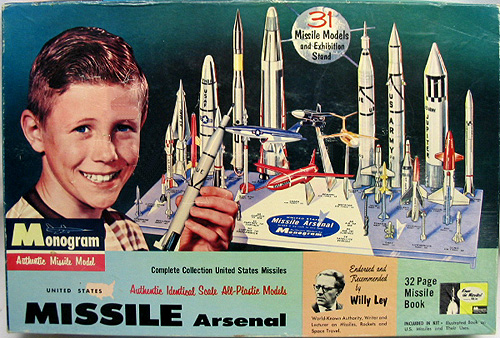 Later in the mid 1960s came the great 1/72 B-52 with short-lived “Jet Sound.“  This excellent kit is still occasionally reissued, minus the Jet Sound. 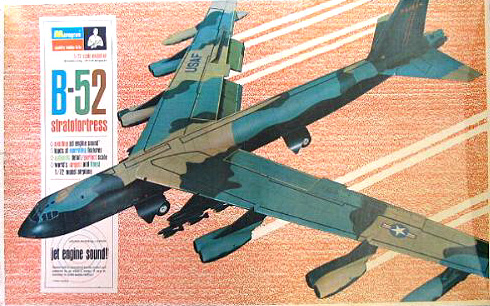 1960s Around the mid 1960s, Monogram changed the box style to the Blue Box.  This is simply a blue bordered box with the artwork inside the border.  Much of the same artwork was retained, but their were new illustrations as well.  The Four Star logo was dropped in favor of a simpler rectangular log.  It was during part the Blue Box era that Monogram was associated with Mattel as shown in the Piper Tri-Pacer below.

“PA” prefixes continued to be used with part numbers until Mattel bought Monogram in 1970.   At this point, “PA” and the new four digit number can be found together.  Eventually only the four digit number was retained. In 1969 the Four Star Missile Arsenal was modified and reissued as “US Space Missiles.”  Some obsolete missiles were deleted and new ones added.  One of several interesting kits from this era is the large 1/24 Phantom Huey.  This large kit features a completely visible UH-1 with operating main/tail rotors and sound.  The B-52 was issued at this time with the dramatic Viet Nam box artwork.  This was the last issue with Jet Sound. 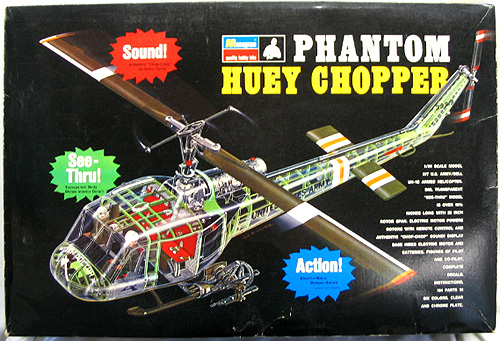 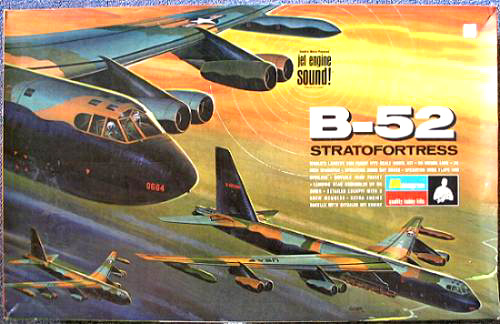 1970s In 1973, Monogram made another major box art change.  The “White Box” featured a white background with a photo of the built model. “PA” prefixes and price extensions were completely dropped in favor of the four digit part number.  The model photographs were used as a response to consumer quality demands and were a significant cost savings as well.  The 1970s were difficult years for model producers as different interests and a general mind-set change drew builders away.  This was particularly hard on manufacturers such as Aurora who had more toy-like kits.  The loss of consumer interest hit Monogram also, but it is worth noting that the Monogram quality and choice of subject matter kept the company in business while others failed.  Monogram continued to reissue popular kits but continued to issue new kits as well. 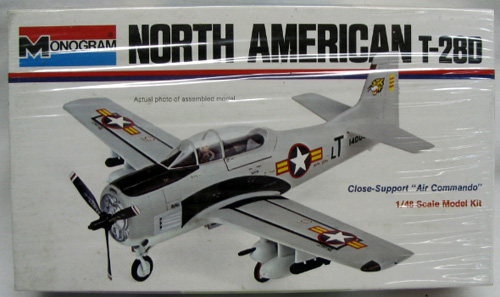 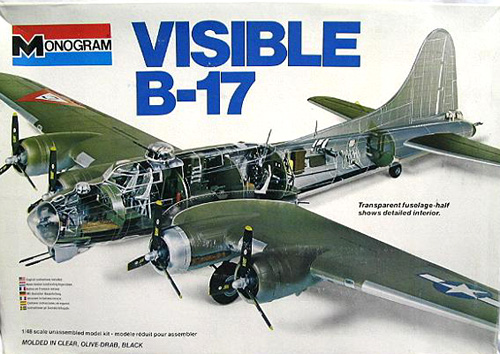 International  Monogram did market kits and lease molds internationally.  In the 1970s several were leased to Bandai and Necomisa.  Marusan copied several Monogram molds.  These copies have turned up as Nichimo, RSL, UPC, Idea and Arc En Ciel kits.  Pegaso and Necomisa (Mexico) have issued the old Monogram OS2U, T-28A, AT-6, SNJ, HU-16, F-80 and some Aurora releases such as the DC-10 and 727.   The Starfix (Israel) UH-1 and Spitfire Mk IX are from the original Four Star molds.  Some, such as this Kingfisher, were marketed in Japan as Hasegawa-Monogram kit.  Exclusive box art was used and Hasegawa mated special instructions and decals to the original Four Star kit. 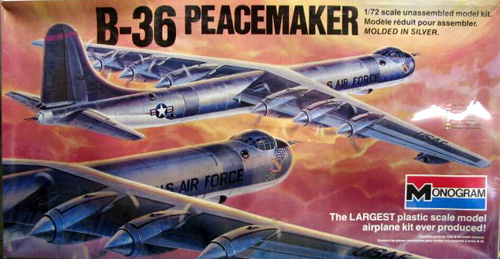 In 1986 Odyssey Partners purchased Monogram. There was a certain amount of mold swapping with Revell as Odyssey had purchased Revell at about same time.   Monogram and Revell were still marketed under their respective names, but all production for both companies was done at Monogram’s Morton Grove, IL plant.  Monogram-Europe also distributed kits for two years in the early 1990s.   In about 1994 Monogram began marketing Pro Modeler in a direct attempt to compete with successful international kit manufacturers such as Hasegawa, Fujimi and Tamiya.   These models featured new box art, extra details and excellent reference work and detail photo in the instructions.   Some, such as the B-17, featured photo-etched parts and optional parts for rare versions.

In 1991 Odyssey purchased the Matchbox tooling from Lesney.  In 1996 Maquire and Partners bought the plastic kit lines and within a year combined the names to make Revell/Monogram.  Some Matchbox kits were still released, usually under the Revell name.  This continued till 1999 when they were again divided.   Alpha International purchased the entire line in 2001 and continues to produce the kits under two names (as of 2007).  It is expected that mold swapping will continue.