Anyone who knows of the Golden Age of Model Aircraft has worked with balsa wood.  This excellent article was printed in several of the Megow Company catalogs during the 1930s and 1940s.   Fred Megow got his start selling balsa and wood stock from the famous ‘Green Cabinet’ in local Philadelphia, PA hobby shops.  The kits that followed were all made of balsa as well, so Megow took the material very seriously, color coding their stock by the grade of wood; yellow (dead soft), orange (soft), red (medium), green (hard) and black (extra hard).  When World War II interfered with supplies,  balsa was hoarded for production as it as at Hawk and other manufactures.  Sadly, Fred Megow chose to close down his international hobby empire in the late 1940s.  I hope you enjoy this article, transcribed here with all of the original photos.  (Alan Bussie)  Google+ profile

Editor’s Introduction: Thousands of model airplane builders have for years used balsa wood with infinite skill and cleverness! Yet few know any more about it, other than it comes from . Therefore, we have asked Mr. Eger, our tropical wood expert to write the article which follow:

This last mentioned species interests us most, as almost 100 percent of all balsa shipped to the is exported from . The reason for the predilection of Ecuadorian balsa is found in its finer texture, white color and extreme lightness of weight. 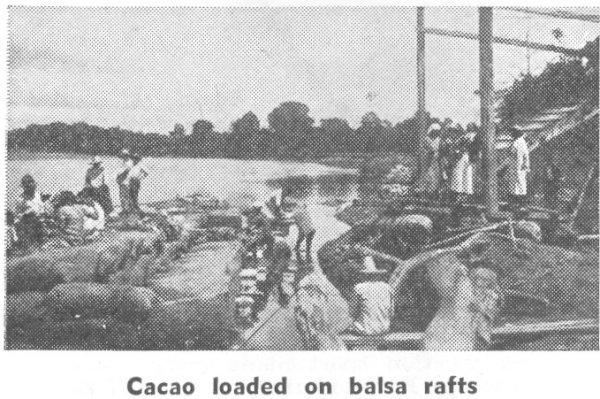 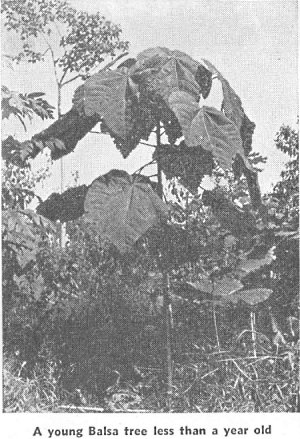 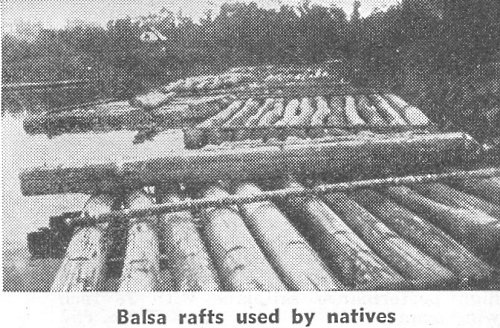 The balsa tree grows only in the lowlands of the American Tropics up to an altitude of 800 to 1000 meters. It is found in all the countries South of the , from to . For a proper development, the tree needs a light and sandy soil. In clay soil the growth is retarded, and the tree develops a red heart, making it useless for commercial purposes. Although the balsa tree is extremely light, there is an abundance of difference in the grade of hardness and weight. This peculiarity is known to the natives, of course, also, and so they have classified balsa in two groups, macho and hembra, which means male and female. This classification has nothing to do with the sex of the flowers, as might be supposed. The hard and heavy trees are called the males and the soft ones the female. The machos are rejected in many local markets, whilst the hembras are sold often at a premium. 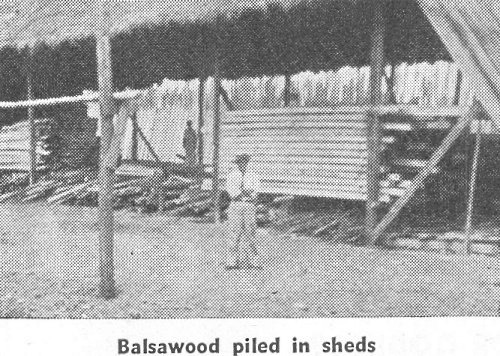 Ochrorna grandifolia or Ecuadorian Balsa is known by the following special marks: The tree is taller than usually found in other countries, with a mottled gray bark; also the wood is lighter than ordinarily. The leaves on the mature trees are nearly entire orbicular, about 10 to 15 inches in diameter. On young trees the leaves are lobed and very large, up to 40 inches. The leaves are glabrous above and rufescent beneath. The male flowers, as already mentioned above, are very large, the calix tube up to 7 inches in length, spreading at the end up to four inches in width, hairy inside, and the stamens are large and showy. Ecuadorian balsa also is whiter than the wood from other territories, the best grade coming from the provinces of Esmeraldas and Manabi, both of them in the Northwestern part of . 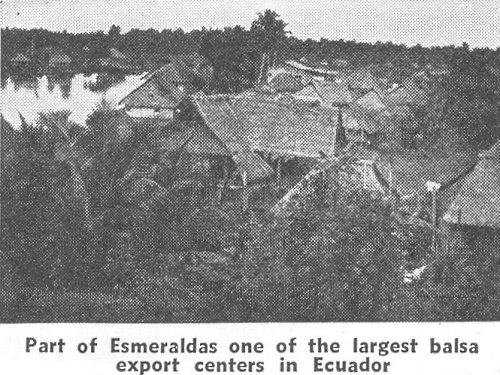 Balsawood is extensively used by the natives, especially for making rafts to bring the produce of the interior parts of the country to the ports. In the olden days, and still today in a few places, where balsa is not exported up to now, after making use of the rafts, they were abandoned and left to float into the sea, people not knowing that the raft had many times more commercial value than the other agricultural products brought down on them. But in most parts of people are now wide awake as to the value of this tree. In many places, due to cutting the trees before maturity, the natural stands of balsa are on the decline.  However, now on all lands that have been used for the so-called three months’ crops, and where balsa springs forth abundantly after the harvest, the young trees are cultivated for future logging. The wood is also used for making canoes, which, of course do not last very long, especially if left unpainted. All kinds of toys are made by the natives from balsa and offered for sale in all ports to the tourists.

The best export market for balsa is the , where more than 90% of all balsa is sold.  Other countries that have found use for it are , , and . 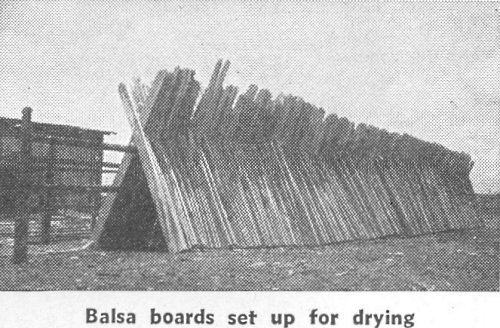