Built by Gothaer Waggonfabrik AG, the Gotha G.V was a heavy bomber used by the Luftstreitkräfte (Imperial German Air Service) during World War I. It corrected a design flaw of the G.IV–mounting the fuel tanks in the engine nacelles, which contributed to three-quarters of G.IVs destroyed in landing accidents! Gothaer moved the fuel tanks to the center of the fuselage. Housing Mercedes D.IVa engines rated at 190 kW (260 hp), the smaller engine nacelles were mounted on struts above the lower wing, e.g., “floating,” between the wings. Thirty-six were built and began operations in August 1917.

The fuselage was fully skinned in plywood. It was noted at the time that the plywood skinning enabled the fuselage to float for some time in the event of a water landing. The Gotha belly blind spot was defended by an innovative “gun tunnel.” The underside of the rear fuselage was arched, allowing placement of a rearward facing machine gun to protect from attack from below. There was a bulge from the left side of the cockpit for the pilot.

The bomber was defended by two or three 7.92 mm Parabellum MG14 machine guns, and attacked with up to 1,100 lbs of bombs.

Aurora issued their Gotha G.V in the late 1950’s. At the time it may have been the largest model airplane kit produced. The Gotha was impressive, with a (relatively) slim and aesthetic fuselage, and elegant semi-swept wings. With the “floating” engine nacelles, large size, plenty of struts and bracing, three crewmen, guns and bombs, the model was a sensation.

The first release was in 1958 and wore kit No. 126-198 (kit number 126, suggested retail price $1.98). The box top was the typical ‘hardbox’ of that era, which was a colorful lithograph ‘slick’ glued around folded cardboard. This is issue was molded in bright burgundy and black. 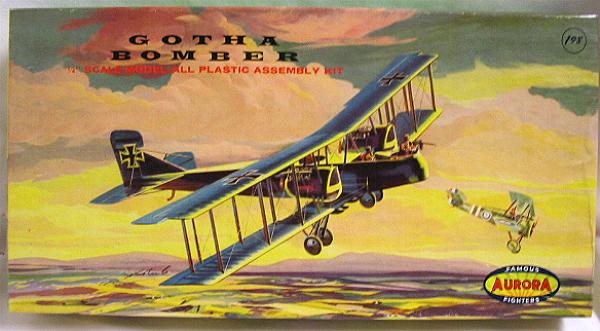 In 1971 a hobbyist/model kit dealer name Ross Abare commissioned Aurora to produce 1,000 of the models in the same plastic color, the original artwork and kit number. However, the non-‘Famous Fighters’ logo was used, thus forever separating the Abare issue from the original issue. Mr. Abare was reportedly quite upset, as he wanted exact copies. 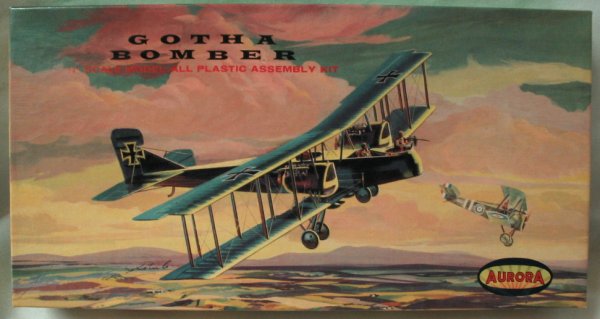 In 1972 Aurora reworked the model, removed the raised plastic decal locators, and reissued the kit as No. 1126-350 under Aurora and 1126-300 with their subsidiary K&B. There may be additional price suffixes as well. These improved molds were molded in a deep blue and black. The box artwork is by Amendola, who did many of the K&B issues. 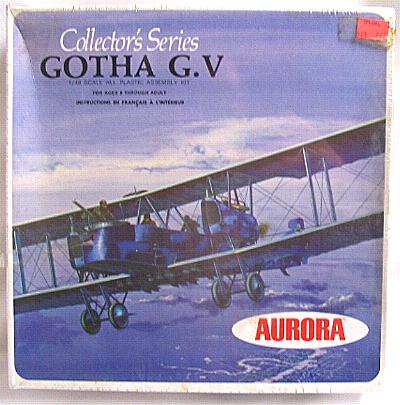 1972 issue with artwork by John Amendola. 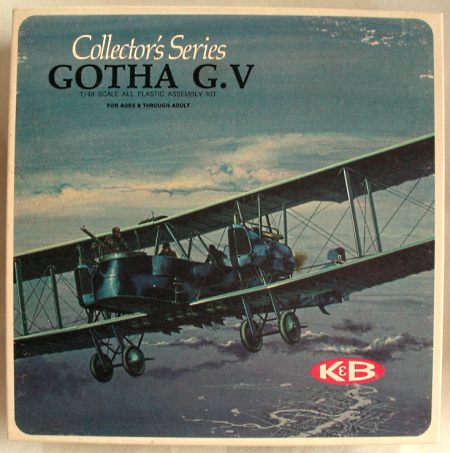 The final issue, kit No. 785 from 1976, is the subject of this review. The dramatic box art was replaced with a photograph of the built model on a white background, and fabric texture was added to the model surface.

Aurora’s final release of the the Gotha – 1976 issue

The Model
This mighty Gotha contains 112 parts molded in olive and black. Earlier editions had two or three groundcrew, and the 1970s sqaure box editions also had a vacuform display base.

The molding is fraught with flaws: sinkholes, ejector marks–notably on the mainplane struts–seam lines, and flash abound. One crew member looks as though he took a 150 mm round through the tummy! Notice the dimpling near the wingtip of the wing in the bottom of the photo. Many parts are over scale, such as the latices propeller guards. However, some pieces are fairly to-scale, like the pilot’s control column and the landing gear struts.

This model is considered toy-like by today’s standards. The model’s fortes and foibles have long been debated, so I will touch upon the more obvious and interesting issues.

Details
Much of the detail is soft and simplified. Almost all of the control surface horns are molded on, and out of scale. The ailerons did not mate flush with the wings, so there should be a gap with noticeable hinges between them.

Outboard from the fuselage, the first 8 feet of lower wing (reaching just outboard the engines and main gear) was plywood with no dihedral. A gap should exist between the wooden and fabric wing segments. The belly gun tunnel is boxy–it was rounded on the actual aircraft. The tail skid was metal tubing instead of the fin style type in the kit. Most wing struts are too bulky, as are the scarf rings. The Parabellum MG14 machine guns are basic. It is a shame the crew suffers from poor molding, as they have decent detail.

The fuselage is textured to simulate fabric. I do not know if the G.V had fabric over the plywood, as some Luftstreitkräfte aircraft did.

Painting, Decals and Instructions
The instructions are simple and nicely illustrated. It includes a diagram for painting the lozenge camouflage. A rigging diagram is also included.

Initially, G.V’s were used for day bombing and had the five color day lozenge print fabric on upper and lower surfaces. Most G.V’s flew night bombing, typically painted with large five color dark irregular polygons. This pattern was different from the pattern used in the printed fabric. Individual markings were common.

The decals are over 30 years old, yet are not yellowed. The national insignia are the early style, instead of the straight style. No unit information is provided though G.V’s flew with Bogohl 3 (formerly Kagohl 3). Decals one aircraft are provided, aircraft 547, Go G.V 504/18.

Conclusion
This kit is another classic trip down memory lane. With a wingspan of over 19 inches (480 mm), and a fuselage of 10 inches (258 mm), this model debuted with a “wow” factor. Even today it is sought for building and collecting. They are rare and disappearing. If you decided to bring the model up to date, it certainly requires quite a bit of work to correct the deficiencies. Move slowly and deliberately to align the struts for the upper and lower wings. There are many examples of well-built Aurora G.V’s on line, so you can make a good model from it.

HIGHS
Interesting model, whether built out of the box, or super-detailed. Until a few days ago the only injection-molded 1/48 Gotha.

LOWS
Flaws in molding, details, engineering, rare and disappearing. Much of the detail is soft and simplified.

VERDICT
There are many examples of well-built Aurora G.V’s online, proof that you can make a good model from it.