After taking nearly 4 years to build a 1/350 Titanic, I realized that I was not having much fun modeling. What could I do to love this hobby as much as I did when I was younger? Then I was lucky enough to meet Eric Freese and Dick Hague. They introduced me to a new style of building strictly for fun. After seeing numerous photos of fantastic looking kits built “The Old Fashioned Way”, I tried my hand at a few and I was hooked. My sincere thanks to Dick and Eric for their “therapy.” I hope you give it a try soon! – A.B.

Alan asked if I would show a FUN way to do a “classic build” kit with no frills – just basic tools and supplies right out-of-the-box, like we did in the 1960s. Sometimes we get too serious about building, and it’s easy to suck the fun out of it. Veteran modelers refer to it as “AMS”; Advanced Modelers Syndrome. Most of us have been there and done that. Remember when model building was exciting? Well, what better way to re-live that than with that old chestnut, the Monogram P-40B Tiger Shark! Let’s get into it, shall we? 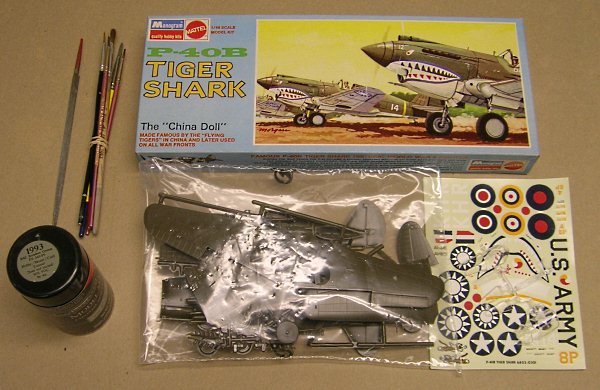 Originally released in 1964 as a “Four Star” kit, it is an all-time favorite that has been released again and again. Today it can be found just about anywhere that kits

are sold under the Revell-Monogram label. Overall, the kit has a number of features including detailed cockpit, seated pilot, optional open or closed canopy, working flaps and optional position landing gear. It is finely molded with delicate rivets and crisp scale lines overall. Add the three options for markings / countries, and you have a well-balanced kit!

When I chose this kit, I decided to dig out my surviving P-40, built at age thirteen. It was my first airbrush project, and I was so excited! As such, I kept it all these decades. After all these years the old Warhawk is still full of attitude. I had forgotten that I also was practicing weathering and dry-brushing on the little fighter. It makes an interesting side-by-side comparison with more modern methods!

For a “classic build”, materials consist of the classic tools and paint colors:

No after-market anything, no airbrush and no putty work!

First off, research is a bit like potato chips- there’s always a bit more in the bag. You can spend weeks, months, or a lifetime and never finish. Luckily, finding data on the Flying Tigers is a no-brainer. As a rabid fan of the P-40, I have plenty of references available at home, and the internet is laden with data and pictures, profiles, etc..

There are many ways to do “Classic Builds.” Some build them strictly out of the box with no paint.  Others polish the original bright plastic and paint only the wheels, props, pilots and bombs. For this build, I will be doing my best to make it appear like the box art with some minor changes.

For starters, I laid out the various parts and determined what interior parts needed the basic zinc-chromate green.  Keep in mind (research here), the lot allocated to Chennault for the AVG (American Volunteer Group) came from a batch of British-bound fighters. I had an interior green suitable for a Battle of Britain era Hurricane, so I knew the gray-green was (presumably) accurate. Once dry, I used a wash of dirty thinner with a drop of black to stain the inside of the flaps and cockpit. This brings out the details Monogram thought to provide.

A dry brushing along the edges of the black instrument panel brought it quickly to life. Dry brushing is precisely as it sounds. Take a wide or flat bristle brush, add a small bit of lighter color paint (white, light gray, etc.), and brush away 90% of the paint onto scrap paper. Now, using a part number on the sprue, test a swipe across them and you have a quick feel for the application to come. Try it, it’s easy and fun!

Next up was the medium gray under-surfaces, which I painted the same way with a quick masking of gray-green interiors parts as needed. Next up was the detail work on the interior components, cockpit hardware and pilot. For the cockpit, black boxes followed by dry-brushing did the trick. The pilot’s face and hands were tan and his suit was medium brown. A dark leather cap and shoes were made from a spot of black and brown paint. This color worked equally well on the exhaust stacks. Goggles were trimmed with silver frames.

All of a sudden, the sub-components are coming together! We have a fighter in the making here, and the cockpit is ready for the fuselage! Since this is an older kit, careful use of the X-acto or file will yield much better fit and finish. For example, the primitive Curtiss gun cross-hairs and bead sight have succumbed to decades of wear, resulting in flash at the worst possible location. It cleaned up nicely with a new knife blade in about ten minutes. This was my least favorite part of the whole model.

Once the cockpit and pilot are installed, glue the fuselage halves together. Carefully attend to the various joints, starting at the tail and spine behind the headrest. Run thin traces of Crazy Glue drops (or swipes) that are sucked into joint cracks by capillary action. Drops were applied from openings inside and under the pilots floorboard. If you use tube glue, test fit the parts first and then apply sparingly along the join lines, clamping the tail with clothespins and fuselage with rubber bands. Allow some hours to totally dry.

Once dry, the seam lines and slight ridges can be gently filed down smooth, carefully and lightly sanded, and polishing with a bit of (dry) paper towel. This has the effect of buffing the plastic back to a seam-free smooth finish without any putty.

The wings and flaps were built up per instructions. The wings on my kit were warped, so a gentle bending by soaking in hot water will correct them so they lay flat on the table. Once assembled, a test fit showed anhedral of the wing, not dihedral! This is easily fixed with some masking tape run from tip to tip and secured across the fuselage once the proper dihedral is established. I carefully applied a few drops of glue and left it alone. Once dry, a bit more glue filled the gaps and cracks.

The landing gear was detail painted and installed per the instructions. The gear doors are a bit tricky as there is not much to mate them up to.  Patience and test fits, as always!

Wow! There’s a Warhawk on the bench! After a final bit of sanding and filing, it is time to start hand brushing the camouflage paint in brown. What, no airbrush? This is a “classic build,” remember?

I applied two coats over a two-hour period and used reference books for the unusual pattern. Go slow and take your time. This is supposed to be fun. Relax and enjoy it! Careful study of close up color photos shows a hard edge finish to the camo paints.

Painting Tip: watch where you handle the bird! Since the kit green plastic is THE green in the camo, don’t smudge brown on the wrong parts! When painting the gentle wavy lines of camo, relax and rest your hand on something close to the model, such as a book or raised object that gets you comfortably close to the kit. First do a small test pass without actually touching the model, then do a small segment of camo, then add another and so on. Work small areas at a time to reduce brush strokes. Check for brush lines by observing the brushstrokes in the light by the shine of the wet paint. A second coat pulls it all together. Use the thicker paint (in the bottle cap) as a caulk to fill some gaps.

Once all essential painting is done, set out the decals and study the placement. Trim the decals as close as possible to reduce the silvering effect of decals on a flat finish paint. Normally I would gloss coat, decal with Sol-va-set and then spray flat or semi-gloss as a sealer. Alas…this is “classic build”, no fancy extras or multiple paints. Just as in the past, scissors are your best friend and so are the tweezers. I cut the sharks mouth into left and right halves for easier application. After gently rolling out any air bubbles with a Q-tip, I let it dry overnight. The decals were friendly enough, reasonably thin and well registered. They did silver a good bit, making touch-up with paint essential.

As the bird was totally dry, I realized that I needed green paint to match the plastic color so I could paint the canopy frames, and if possible, touch up any minor spots. It would have to be created. I had tan, brown, and black. It turns out that (after three attempts!) brown mixed with a wee bit of black yields a deep green/bronze color 90% on the mark. I applied the canopy parts with very small amounts of Crazy glue as I did not have Elmers white glue handy. I paid for it with fogged canopy parts due to the high humidity.

She is coming together now, with final trim paint, detail touch up here and there, a bit of very subtle weathering, and some dry brushing in key areas. One neat trick I do for fun is to apply REAL wing walks. The non-skid surfaces are very rough in real life, so I use strips of black or dark grey sandpaper. USED sandpaper works best and is applied with a “glue stick” pen from the desk or white glue. You get in-scale, true-to-life wing walks. They also happen to cover much of the seam lines of wing to fuselage joint! Keep weathering subtle and logical for the theater of operations of a specific aircraft. These warbirds were hard-worn on gravel / dirt runways, tropic heat and intense sun.

In summary, this was a blast to build!  I put about 7 hours total time (including research) into this project.  Too many kits have been frozen in limbo at my bench for “more research” or extra details, and nothing much really gets done. Old kits now and then break the ice!  As a kid I couldn’t wait to get into ‘em. Get a “basic” kit, and JUST DO IT!!! You’ll be glad you did!

Old vs. Classic Build! The P-40s share the bench with a “Classic Build” Aurora P-40! (click any to enlarge)

Monogram, Revell and other Classic Builds (click to enlarge)

I love this build.  Dick polished the beautiful blue plastic to a high sheen then simply painted the details such as the prop, wheels, bombs and pilot.

Strombecker’s venerable Sea Dart kit – and on the contest table

The Entex issue of the XP-50.  Dick’s written comments on the contest table sum it up perfectly

Eric is a long time modeler who has won awards for IPMS Master in 1/72 and 1/48 aircraft and has over a dozen 1/72nd scale USN built up models displayed aboard the USS Massachusetts aviation museum. His numerous scratch building projects include a 32″ CVE carrier currently on display at the Navy Memorial Museum in D.C.. Restorations include a 5 ft. long HRP “Banana” restored for USMC Quantico Air / Ground museum. He enjoys flying and crewing WW II bombers and trainers. Currently he is modeling and performing Norwegian Viking reenactments and history lectures for school children