In 1958 Aurora released a Thor rocket but the model did not sell well.  To get more use from the mold, they added a galactic instrument payload intended for moon exploration.  This was released in 1959 as the U.S.A.F. 4-Stage Rocket Lunar Probe with Launching Pad and Servicing Tower.  The kit number on the box is 385 – 2.49, with “2.49” being the retail price of $2.49, or approximately $25.00 in today’s dollars.  Compared to model prices today that was an exceptional value for a multi-stage rocket and payload, with launch facility and figures! 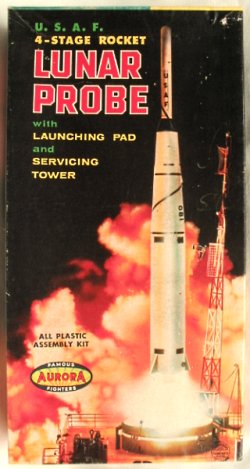 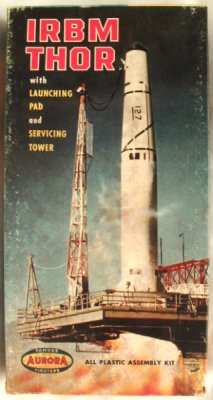 I do not recall Aurora rocket and missile kits vying for shelf space at my town model outlets: City Cycle Hobby Shop, Bell or Davis Drug Stores, Value Village; nor at Kresge, Woolworths, Sears, or JC Pennys.  Perhaps my modeling interests made space and missile subjects invisible to me at that time, or perhaps Aurora had already discontinued the kits!

Lunar Probe was packaged in an Aurora standard “long box” carton with a sturdy cardboard conventional lid-tray design.  Spectacular box art on a black background shows a Thor blasting off from its pad in front of dramatic billowing flames, the white-hot exhaust plume almost blinding even on the box!  While the box sides are black, the ends show a daylight scene of the vehicle in the company of lights, buildings and antennas.  The sprues were loose in the box, which means that several pieces could be expected to be rolling around loose.  Instructions and decals were included, and occasionally a promotional insert.

Fifty-four pieces build up this subject.  As this kit was essentially two distinct model subjects (launch vehicle and launch facility), the two kits were injection molded in different colors.  The Thor and payload was white, the pad and tower and support components gray, and the launch foundation a glossy dark gray.

Twenty-five parts create Thor (15 pieces) and the payload – a Vanguard and a Pioneer rocket, and their satellite payload (10 parts)

It is good in that most parts are well defined, with no flash, only slight mold seams, and few obvious sink holes.  What defaces the pieces, especially on the service tower, are numerous raised and recessed ejector marks.  Some of those may actually be for expansion during the injection process but it doesn’t help in terms of accuracy and aesthetics.  I test-fitted Thor rocket and found the seams joined tight with no light visible through them.  The glossy white styrene seems a bit brittle, though.  The three figures display the worst molding quality, and one has an obvious sink in his lower abdomen.

The kit scales out to roughly 1/72 by the rocket and figures.

Aurora tooled raised textured areas on the rocket where the markings and insignia would be.  That was typical of many model makers of the era.  They should be easy enough to remove if you want to put the time and effort into sanding them away.

The rocket was made with separate parts for the fuel receptacles and several other items.  The launch pad has several separate “U” clamps, stand pipes, and toggle braces. Electrical wire is included to represent the fuel and command conduits.

There are a few raised and recessed panel lines and other details, but beyond that, the surface detail is sparce.  Detail consists mainly of the satellite and basic girder shapes for the tower.  The launch pad includes slight expansion joints carved into it.

Aurora printed up a nice large multifold paper sheet with text, line art and half-tone illustrations.  One side has the assembly instructions and the other side advertises all of their models, with emphasis on their series of “Whirlybirds” and tanks. Aurora hawked their brand of paint and glue in the instructions also!

Assembly is guided via the “exploded” style of illustration.  Assembly of each major sub-section is shown, followed by fitting those assemblies together.  There are 18 steps for sequence A, the Four Stage Rocket, and 19 steps for sequence B, the Service Tower.  A concise history of the vehicle is included in a sidebar.

You can see that the decals offer markings for a single SM-75 rocket: No. 130.  The decals have thicker carrier film that extends farther from the printed graphics than is acceptable today.  I would like to tape the sheet to a south facing window to determine how much yellowing will bleach out, and then try soaking a decal; would it slide off or disintegrate?  Aside from the national insignia, rocket livery was pretty bland.  All of those markings were intended to be applied over the textured areas.  The sheet is from the original Thor IRBM (intermediate range ballistic missile) and is so named.  Because of the Pioneer payload, there was a need for more markings, which Aurora duly included.  Hence the inclusion of two small sheets of black rectangles.

A vintage kit historian told me that the PGM-19 Thor IRBM kit did not sell well 56 years ago, and this revision of the model was not a best seller either.  Judging from Aurora’s promotional image of the assembled kit, I think it builds up into an interesting scene.  The model is acceptably molded.  There are many parts for the tower and base.  The service tower structural members may not be razor-sharp yet neither are they soft in molding.  The four stage rocket can be made to pull apart to admire each component.

Foibles are out-of-scale parts such as the SM-75 stabilizer fins, ejector circles on the tower and softly molded figures.  As for the molded insignia areas – I am glad those are not used anymore!  They appear to be relatively easy to sand away.

Space kits started off as best sellers in the late 1950s, and Aurora, Monogram and Revell raced to bring more of them to market.  However, the initial sales were a ‘bubble’ only.  Interest quickly fell back to aircraft kits, and manufactures wisely discontinued the missiles.  It is a pity that it was not more popular “back in the day,” as I would like to build one now!  Certainly, the quality of molding is not up to today’s standards when compared to some of the main manufacturers.  But then again, some of their “latest & greatest” aren’t up to their hype, either!  If you have one of these kits, treat yourself and build it.  I think you would be happy with the outcome!

We thank OldModelKits.com for kindly providing this kit for review!

The single-stage Thor intermediate range ballistic missile, originally designated as the SM-75, entered active military service in September 1958, thus becoming the free world’s first operational IRBM. The first Thor missile was delivered to Cape Canaveral, Fla., for testing less than a year after the development contract was signed. The Thor was launched from a combination transporter-erector vehicle and was directed to its target by a self-contained inertial guidance system.

Thor missiles were assigned to the Strategic Air Command and were also deployed to England early in 1959 where they were maintained in a state of combat-readiness by the Royal Air Force. With the development of more advanced missiles, the Thor was retired from its military role in 1963; however, some Thor missiles were modified and used extensively for space research, either as a single-stage booster or in combination with various types of upper stages for such projects as the Tiros, Telstar, Pioneer and Discoverer programs.*