Aurora’s Nieuport 28 [sic] was the eighth model of Aurora’s 20 “Famous Fighters” 1/48 World War One aircraft. It was released in 1957 with two other single-seaters and three two-holers.  The first release is kit number 108-69 with the oval logo, ‘Famous Fighters’ in the border, northern lights in the center back ground and the Parent’s Magazine seal on the lower left.  The short box sides have a yellow background.  Box art is by the famous Jo Kotula.  This was one of his earlier aircraft illustrations for Aurora.  Inside, the kit was molded in gloss light gray and black.  The mold quality was certainly a step above the earlier Aurora efforts.

The second issue was changed very little and probably came out in about 1958 or 59.  The 10 cent price increase was reflected in the new part number of 108-79 and the Parent’s Magazine logo was still included.  This time, however, the short box sides have a blue background instead of yellow.  The parts inside are identical.

The changes were very minor for the 3rd issue, probably dated 1959 or ’60.  The part number and artwork remained the same – the only difference is the Parent’s Seal is gone.  The box ends remain blue and the parts are unchanged.

This issue continued in production until 1967, when it was dropped from the catalog.   By 1971 only the six original 1956 molds were still in production of the original WWI line.  The Nieuport 28 was never seen again in the main US catalog.  However, there was another issue.

In 1972 Aurora reworked some of the molds by adding fabric texture and removing raised insignia and data markings for subsidiary K&B as the ‘Collectors Series.’  Usually when model makers add “Collector” to a model it equals a junky kit at triple the price.  Not K&B!  These were packed in large square boxes with detailed art, and the square box held the beloved vacuformed diorama base!  The Nieuport was K&B kit 1108-170, specifically the Nieuport 28 C.1. 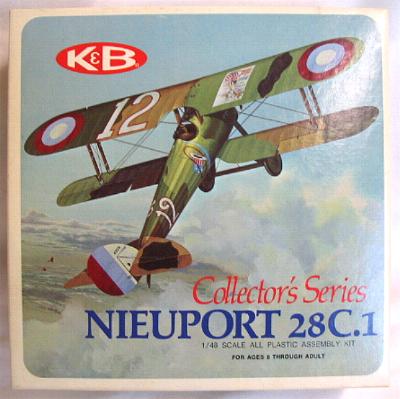 Sadly, that was the last issue.  This kit was not reissued as a 700-series model in 1976.  After Aurora went tango-uniform the molds were saved and ended up in the possession of Glencoe Models.  Glencoe removed the molded insignia and re-issued it with several decal options.

Many Nie.28 models have been kitted over the years in various media, including those by Balsa USA in 1/3, 1/4, and 1/6!  A quick spin around the net shows that Aurora’s original can be built into a beauty!

This review is of an original 1957 model in a ‘long box’ issue.  Inside are instructions, decals, and 33 light gray and black parts.  One piece is an identification button imprinted with “NIEUPORT 28C-1 FRANCE.”

Molding is high quality with virtually no flash.  There are mold seam lines to contend with on some parts, and visible ejector marks, yet I found no noticeable sink marks.  Tooling to-scale-thin struts and such were beyond Aurora’s ability (or interest) yet the stabilizer is so thin that light comes through it (No, it’s not fragile) and the mainplane trailing edges (and vertical stabilizer & rudder) are less than a scale inch thick!  I held the fuselage halves together and no light could be seen along the joints.  Some filler may be necessary at the junction of the fuselage and empennage & fuselage and wing.  Care will also be required where the cabanes and interstruts mate into the airframe.

To populate the kit a seated pilot and standing mechanic are provided with a ground base.

Aurora put enough effort into the crew that they are not lumps of humanoid plastic.  However, the detail is soft.  The pilot has the only sink hole I found, it looks like he took a 25mm in the sternum.

As was the fashion of the era, sadly all insignia are molded onto the wings, fuselage and rudder with raised lines.  Removing it is a horrible exercise at best even on flat surfaces!  Otherwise the fuselage looks nicely done.  The top sides of the wings have ribbing detail but the undersides do not.  If it were not for the ejector marks (on the struts and one in the middle of the venturi) the overall molding would rival many of today’s kits.

Aside from the pilot, seat, floor and stick, there is no interior detail.

The wheels blend the tires to the hub covering.

The Gnome N-9 rotary is about as basic as they come with only cooling vanes and crankshaft bolt detail.

Aurora made the model too wide at 27-feet 3-inches, although it is accurate in length.  Aurora was one of – if not the – first companies to mold continuous scale models instead of “box scale” kits.

Aurora made no effort to even hint that the Nie.28 had rigging in the single sheet instructions of seven exploded views and 23 textual steps.  It also advertises Aurora’s Polystyrene Cement.  A history is included along the right edge.  The back side is a catalogue of Aurora’s models.

Painting instructions suggest black, brown, green and silver.  Aurora wrote, “Most of the Nieuport 28’s used in 1918 by American squadrons were LIGHT GREY, which is the same color as the molded parts in this kit”.  Hmmmmm…I don’t think so.

It is a shame the decal have yellowed with age as they are sharply printed in-register and opaque, with good color.  They represent the aircraft of Lt. Eddie Rickenbacker, N.6193, “white 12”, 94th Aero Squadron.

Aurora did a commendable job of molding and detail for the era.  I appreciate the figures and display base.

Visible ejector marks, token detail, and soft detail on the figures detract from the overall model.

Those who wish to build it to current standards will find it ripe for detailing and in need of serious surface sanding.  No doubt you can make a respectable model with it, as evidenced by the many examples online.

The Nieuport 28 biplane, introduced during the closing months of the first World War, was being used by most of the American Aces at one time or another in their World War I career. This aircraft was issued to both France and the United States. One of the French Squadrons was the famous “Lafayette Escadrille”; and for the United States, the well-known American 94th. (Hat In The Ring)

The ’28’ was the culmination of a long series of Nieuports. It was faster than its predecessors, and considered by some experts to be the most beautiful airplane of World War I. It was certainly one of the cleanest and neatest ships to serve at the front. In its design, nothing was sacrificed aerodynamically. The Nieuport engine was a Gnome 9N monosoupape (one valve), rotary engine, delivering 160 H.P. at 1400 R.P.M. Top speed was 126 M.P.H. at sea level, and 121.5 M.P.H. at 10,000 feet. It could attain an altitude of 22,300 feet, and carried sufficient fuel for 1 hour and 44 minute operation at full throttle.

In flight the ’28’ was a simple airplane to operate. Although stable both laterally and longitudinally, it was typical of rotary engine planes, and suffered strong gyroscopic effects. Its maneuverability was very good, as was its rate of roll, and though it spun quite easily, recovery was quick and simple.

Of many complaints against the plane, only two were valid. First, it was very susceptible to fire to a certain extent. As in most rotary engines of that day, the accumulation of gas in the cowling was always a hazard. In many cases though, it was the pilot’s negligence that brought about the fire. Since most rotary engines were either on or off, they could not be throttled as could stationary engines. To obtain lower output, controls were available whereby the ignition of one or more cylinders could be shut off. In spite of intense training, pilots frequently forgot to shut off the fuel when they cut off the ignition. As a result, raw gas poured out of the non-firing cylinder onto the cowling, and mixing with the air, it did not take much for this highly volatile material to explode and burst into flame. If the fire was not too serious, the pilot could dive in an effort to extinguish the flames. The other complaint often voiced, was the wing fabric shredding during high speed dives, a notorious defect of the Nieuport 28. The wing had an almost knife like edge and a very thin wing ratio. The inherent characteristic of this design caused the ’28’ to accelerate quickly in a dive, causing a peculiar flow of air around the sharp leading edges at high speeds, which was the cause of the fabric failure. Ironically enough, it was not until after the ’28’ was taken out of service, that it was discovered that by merely moving the fabric stitch line back about 6 inches from the leading edges of both top and bottom wings, the shredding could be eliminated. Properly handled however, the ’28’ was a safe plane, and a first class fighter.

It was in this plane that Eddie Rickenbacker (later, the King Pin Ace of the A. E. F.) first began his fighting career. Rickenbacker was in London in 1917, when the United States entered the great war. He returned home with the idea of starting a crack flying air team, but was unsuccessful. He returned to France as the special chauffeur to General Pershing, and on his own request, was transferred to the Air Service on August 25th, 1917. Sent to Issoudun for preliminary flight training, he next went to the gunnery school at Cayeau.

On March 4, 1918, Eddie joined the 94th Army Air Squadron at Villeneune, France. It was there on April 14, 1918, that the first war flight-order was given to an American Squadron completely manned by American pilots. The order posted for that day simply stated that Captain Peterson, Lt. Reed Chambers, and Lt. E. V. Rickenbacker, were to take off at 0600 and patrol the lines from Pont-A-Mousson, to St. Mihiel at 16,000 feet, returning at 0800. Lt. Alan Winslow and Lt. Douglas Campbell were ordered to stand the alert from 0600 to 1000. On this day, April 14, 1918, ‘Rick’ made his maiden flight over enemy lines. It was his baptism, his initiation, and his graduation. He delivered a personal calling card to the Boche, his “HAT IN THE RING.”

It was to Lt. Douglas Campbell, however, flying his Nieuport 28, to whom credit was given that day, for shooting down the first German airplane by a member of the A. E. F. Two weeks later, Rick nailed his first Black Cross, and in that month of May, he bagged five more enemy planes to join the ranks of the American Air Aces.

For the next two months, until July, the Nieuport 28, in the hands of American pilots, aided substantially in the Allies’ eventual mastery of the air over the western front.

Eddie Rickenbacker flew a Nieuport 28 (Factory Ser. No. 6193) with the number 12 on both sides of fuselage; on top side of left upper wing and on underside of right lower wing.